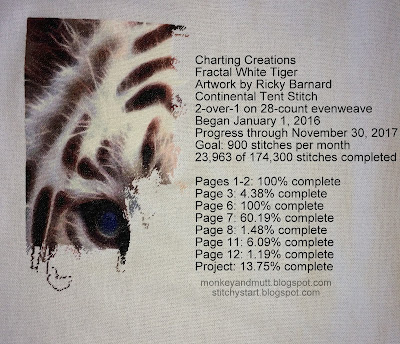 There were 1,279 stitches added to my Charting Creations Fractal White Tiger cross-stitch this month.

The chart is based on the artwork of Ricky Barnard. 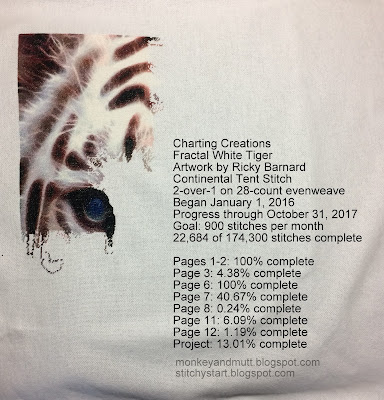 This is how it looked last month. To me, the progress is difficult to see. However, the top 2 rows of the page are done.

I began this project on January 1, 2016 to participate at stitchystart.blogspot.com. You may see what others are working on here.

Thank you for stopping by!
Renee 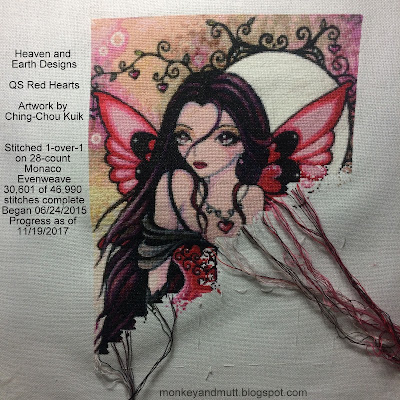 This weekend I added 1,399 stitches to my
Heaven and Earth Designs "QS Red Hearts" cross-stitch,
based on artwork by Ching-Chou Kuik.

I was hoping to add 600 stitches, so I am thrilled with the progress.

I finished another diagonal row of the chart and surpassed
the 30,000 stitches milestone.
The photo above shows 104 days of progress. 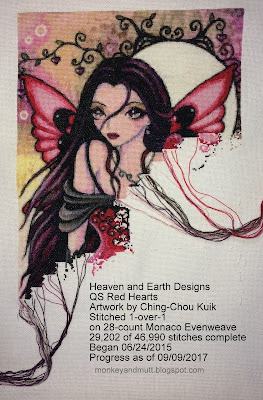 This is how it looked in my last update (way back in September...)
I am finding it difficult to put her away until IHSW in December.

International Hermit & Stitch Weekend (IHSW) is the the third full weekend of the month. You may find more information about IHSW at Random Ramblings here. There is a new Facebook group set up for IHSW here. It was fun to see everyone's progress. 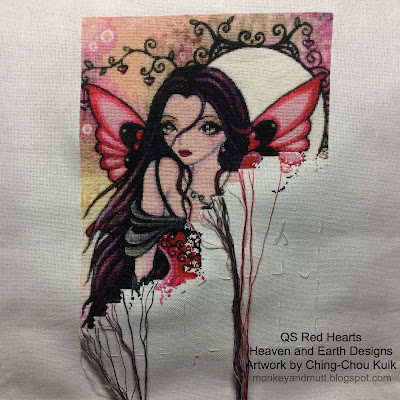 It is the third full weekend of the month, which means it is International Hermit and Stitch Weekend (IHSW.)

Yikes! I have not worked on this piece since September 9th. I hope to have visible progress to share on Monday.

It is going to be a busy weekend here, tidying our home to host Thanksgiving next week. And, my youngest son and his friends will be performing in Once Upon a Mattress, a musical parody of The Princess and the Pea.

Are you doing anything fun this weekend? I hope you have a great one!

You may read more about IHSW here and see this month's post at Random Ramblings, here.
Posted by Renee at 7:56 AM 5 comments: 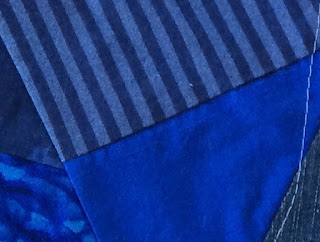 I am still catching up with some of the TAST stitches that did not easily work into projects I was working on as they were introduced.

It is a bit difficult to see in this photo, but after piecing this crazy quilt stocking for my son, I realized I forgot to trim the selvage from the solid blue fabric and that it was showing beneath the blue striped fabric. Rather than ripping the seams out, cutting the selvage off, and sewing the fabric back in place, I decided I could easily hide the selvage with a ribbon, trim, or with embroidery. The raised herringbone band came to the rescue!

Next, herringbone stitches were added with a light blue size 8 perle cotton thread. (I used the stripes in the fabric above to measure the distance between my stitches to keep them relatively even.)

Two strands of a variegated blue cotton floss were then laced through the herringbone stitches, as I wanted that to be rather subtle.

When I finished, my husband entered the room and peeked over my shoulder. He said it looked cool. I thanked him and said the blue foundation stitiches were the most time consuming. His response was hilarious.

"Wait, that dark blue is all stitched? Seriously?" he asked, taking a closer look. "That's insane. There has to be a faster way," he said.

I explained there were faster ways. I could have used ribbon or another trim beneath the herringbone stitches, but then it wouldn't be the raised herringbone band.

He shook his head, mumbling something about that being ridiculous or insane.

His eyes grew wide and he shook his head.

"Are you kidding me? I think it looks amazing! But that's just crazy," he replied.

One person's crazy is another person's fun, I guess! (Perhaps that is why it is called crazy quilting?!)

Thank you for stopping by.
Renee

TAST stands for Take a Stitch Tuesday. It is a personal stitching challenge offered by Sharon B. at pintangle.com. You may read more about it here. There is also a TAST Facebook group you may find here.

The next round of TAST will begin in January. There will be TAST for beginners and Beyond TAST, for those that have completed TAST in the past. You may read more about plans for TAST next year here.

For those of you that may be interested in joining TAST next year, Sharon shared a great article about the supplies you will need. She shared several money saving ideas. You may find that article here. 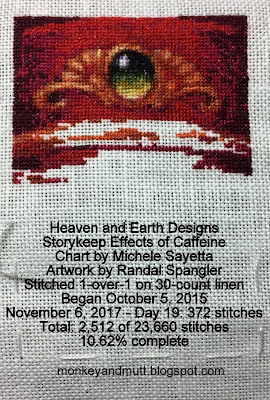 On Monday, I took someone to an appointment and brought my travel project along to work on in the waiting room.

I would love to say I made all of my progress during that appointment, but I barely started working on it when a young lady politely interrupted to see what I was working on. She cross-stitches, but had not seen charts by Heaven and Earth Designs. When she saw the cover of the chart for this Storykeep Effects of Caffeine by Randal Spangler, she rushed it over to show to the young man she was with. I spent the rest of the time visiting... :) 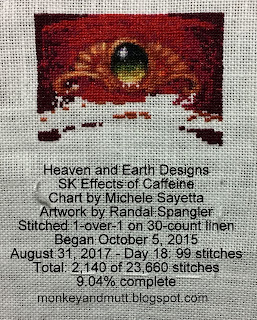 When I got home, I decided to work on it a little while longer and managed to add 372 stitches. The photo above shows 19 days worth of stitching progress. The piece is just over 10% complete and the jewel section at the top of the book is done.

This photo shows how it looked in my last update.

I do not have a photo of the completed piece to share, but you may view it on the Heaven and Earth Designs website, here.

Thank you for stopping by!
Renee
Posted by Renee at 3:46 PM 8 comments: 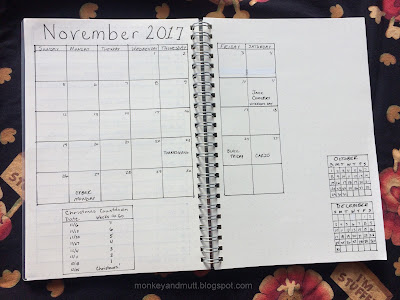 November has arrived.
In just 2 months, we will be greeting the year 2018.


Progress with my October goals:

The list of October goals may be found here.
Click on any photo for a larger view. 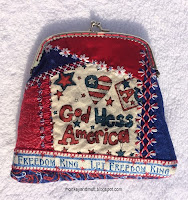 A clutch purse was created with my May CQJP 2014 block. This was my August 2017 UFO Challenge project. More details are in this post. 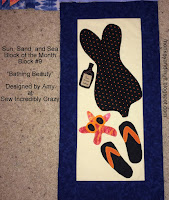 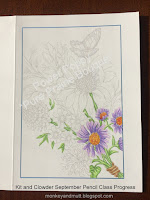 This is my progress on coloring the Pure Prairie Bouquet digital stamp from Power Poppy for the September pencil class through Kit and Klowder.

This is a lovely design, but I may set it aside until after the holidays to finish. The classes take some time. 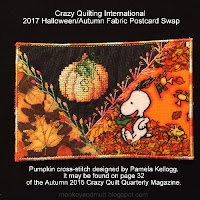 This fabric postcard was created for a swap. It was yet another finish, as the cross-stitched pumpkin has been sitting in a drawer for about a year. The blog post is here. 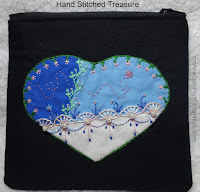 This small zipper pouch coin purse was added to my Hand Stitched Treasure Etsy Shop. The blog post is here and the Etsy shop is here. 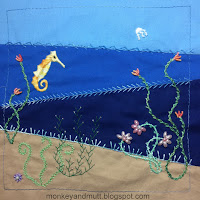 Progress was made on my Crazy Quilt Journal Project (CQJP) 2017 March block.

1. Finish embellishing this Christmas stocking for my son. Some progress was made in September and shared on Instagram. (#10 on the APQ 2017 UFO Challenge, selected in June.) 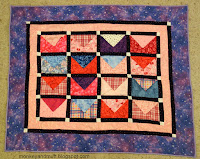 2. Add a label and a hanging sleeve to this "Sealed with a Kiss" quilt. This is a smaller version of the pattern in the book Hearts Aplenty by Lynda Milligan and Nancy Smith. 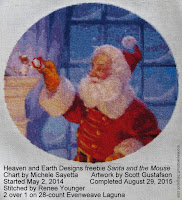 3. Frame my Heaven and Earth Designs Santa and the Mouse Ornament cross-stitch based on artwork by Scott Gustafson. The chart is retired, but a similar chart is available here - it is a quick stitch of this piece of art. (#9 on the APQ 2017 UFO Challenge - selected in November.)

4. Finish "Beach Boy Freddie", the September block of the Sun, Sand, and Sea BOM at Sew Incredibly Crazy and Friends.

5. Finish the October Sun, Sand, and Sea BOM from Sew Incredibly Crazy and Friends. (Due to Internet issues, it has not yet been shared on Amy's blog, but there is a sneak peek at Moosestash Quilting.) 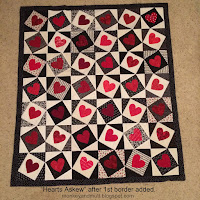 6. Sew the second border on my "Hearts Askew" quilt and stitch around the appliqued hearts. The pattern is from the book Hearts Aplenty by Lynda Milligan and Nancy Smith.
I found the fabric and finished the first border in October. (#3 on my APQ 2017 UFO Challenge List - selected in October.)


7. Finish my Kit and Clowder October Pencil Class. So far, I have printed the stamp onto paper. The Special Edition Snowman and Penguins digital stamp was designed by Crissy Armstrong specifically for this class and is only available a limited time at Whimsy Stamps, so this link goes to their digital stamp collection - not directly to this stamp. It is incredibly cute!

8. Finish Christmas gifts to share on the 1 X-Mas Item a Month Blog. In October, I made progress on two mug rugs featuring the "Snowman" digital stamp from The Paper Shelter.