In December, I decided to participate in the Crazy Quilt Journal Project 2013. What is it?  As described on their blog, "The Crazy Quilt Journal Project 2013 is about promoting the art of crazy quilting and expanding the participant’s individual artistic creativity and technical knowledge." It is a commitment to complete a block a month, and hopefully, assemble a quilt from those blocks.  (For some wonderful inspiration, I encourage you to take a look at the CQJP 2012 blog.)

It took me a few days to decide if I wanted to add another commitment to my busy life next year.  In the end, an excuse with deadlines to create a crazy quilt block every month sounded like a good idea to me!  *Grins*

In the rules I discovered the project should not include something we are already working on, so my monthly themed blocks would not qualify.  I have always loved landscape quilts and thought 6-inch blocks would make for pretty quick work.  Right?!  Well, I planned my first block and realized that might not be the case.

To save time, I decided to assemble two blocks the same day.  This way, when I finished one, the other would be ready.  I had pretty clear ideas for one block, and the other, I knew would be more challenging.  Guess which one I decided to work on first?  The trickier of the two for me, of course.

I was hoping to complete my first block before posting photos here.  However, as I have been putting as much of my free time as I could into it for the past week and a half, and it is not even half complete, I gave in to the temptation to share my progress so far.

My "plans" for the block are a simple sketch on a yellow sticky note.  I wanted to put a house along the horizon and I wanted it to look realistic.  A cross stitch leaflet I have came to mind, so I found it and discovered the perfect house to add to the block.  The leaflet is from the Stoney Creek Collection and it is called Country Living Book 130.  (I tried to find a copy on-line to link to, but I failed.  Sorry!)  The house I chose was taken from the pattern entitled, "Cozy Winter Twilight."  This is only a small portion of the original pattern.  I LOVE Stoney Creek cross stitch patterns because the shading is simply gorgeous.  Of course, that same shading takes me forever to stitch...
I learned a few important things about cross stitching onto a crazy quilt block.  First, I learned it is a REALLY bad idea to put an intensive pattern across a seam.  (Putting a needle through that many layers of fabric again and again is hard on the fingers.  I could have tried a thimble, I suppose, but I never claimed I was smart - lol!)  I thought that would be my biggest challenge.  However, when it came time to remove the mesh I put down to guide my stitches, I was in for a disturbing surprise - my second lesson.  Instead of pulling out, the threads snapped.  Careful use of a needle and a LOT of time allowed me to remove the layer beneath the tree.  Then, I had to use a pair of sharp scissors to VERY carefully trim the coarse threads all the way around the house.  At one point, I nearly cut the thread used to back-stitch the design.  In the end, I suppose I salvaged the block.  But it was certainly a stressful hour or so, wondering if I had just wasted the past week of stitching.
Next, I began stitching a tree in the lower-right-hand corner.  You may recognize this silver birch tree from the stitching I did on Mardeen's block in my first round robin.  For Christmas, my wonderful husband gave me my very own copy of Diana Lampe's and Jane Fisk's Embroidery for all Seasons!  I will be making very good use of that book with my landscape themed blocks this year, I am sure!
I am anxious to complete the tree and move on to the next section.  I just need to figure out exactly what that will be first!

Thanks for stopping by again!
Posted by Renee at 1:38 PM 10 comments:

Glasses case for my niece

I began this glasses case some time ago, in hopes of completing it as a birthday gift for my niece.  Her birthday was in November.  In November, I was also training for my first half-marathon.  (Due to a stress fracture in my foot the week prior to the race, my first half-marathon will have to take place in 2013.)  And, I was participating in NaNoWriMo. (Although I completed 50,000 words in 30 days, my story is not done and needs A LOT of work!)
So, I ended up finishing this gift - literally - just in time for Christmas (at 1 o'clock in the afternoon of December 24th.)

I need to make myself a tutorial, as I have altered the original pattern.  It had been a while since I last assembled a case with a button latch, and I forgot to add the button hole when I should have.  Also, the button I used was quite large.  I needed to make the interfacing on the button flap smaller.  The seams were too bulky to fit beneath the presser foot on my sewing machine, so I had to create a make-shift button hole.  I also placed the hole higher than I would have liked.  Next time, I hope to do better.  In spite of my mistakes, my niece LOVED her gift.  It has her favorite colors: blue, purple and yellow.

Oh, I have decided to participate in the Crazy Quilting Journal Project 2013 (CQJP 2013) this year.  The first photos should be posted on their blog on January 1st.  I hope to have my first 6" block completed soon, to share with you.  I thought the 6" blocks would go pretty fast.  Then I planned my first design... I should know myself better by now!
Posted by Renee at 10:53 AM 4 comments:

I am looking forward to giving my blog (and my CQ projects) more attention!  In a previous post, I was looking forward to creating my first seam treatment inspired solely by my own imagination.
The broom handles were made using brown floss and a buttonhole stitch.  At the base of each handle, I made three small lazy daisy stitches with a yellow floss to create mop heads.  Next, I cinched the tops of the mops by carefully bringing brown floss out from beneath the yellow stitches, near the handle.  I wrapped the brown around the yellow twice, gently bunching the yellow stitches together.  Then, I pulled the needle through the back again, hiding the stitch beneath the gathered yellow lazy daisies.

In the end, the two Halloween panels looked like this: 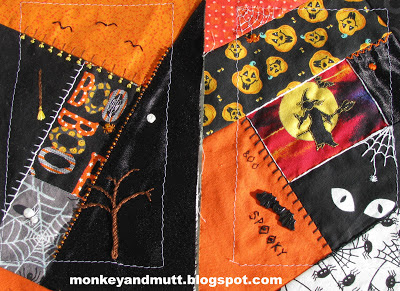 I had so much fun working on this project!  Of course, the glow-in-the-dark fabrics and embroidery floss may have had something to do with that.  *grins*

The delicate way the silver spiderweb turned out in the upper-left corner is one of my favorite parts.
This glasses case was a gift to myself.  Although, now that it is December, I am thinking I should make one a little more versatile - lol!

I wish you all a wonderful day.

I received the fourth and final block from my first Crazy Quilting International Round Robin on October 29th.  Unfortunately, I knew November was going to be insanely crazy.  (I participated in NaNoWriMo 2012 - and actually completed the challenge this year!  I will save that for another post...)  My hopes of completing my final block between October 15th and 30th did not quite pan out.  With life being, well, life and the holidays and everything else, we were all running a bit behind; so, no one has been held up by my delay.

In my opinion, the block is absolutely lovely.  Crystal, Hazel and Mardeen did beautiful work on this gorgeous jewel toned block.  This is how it looked when it reached my home.  (Click on the photo to view a larger image.)

I am not sure how many days I sat and stared at the block, trying to figure out what to do and where.  This block was a great challenge for me.  I find printed fabrics particularly difficult to embellish, and three of the four spaces remaining were prints.  I also spent hours and hours perusing photos of other crazy quilted blocks to see how I should embellish seams partially covered with other embellishments.

I began working in the lower green corner.  Originally, I planned to put in a seam of flowers, but they would have been upside down.  So, I opted to put in a gold spider web.  I purchased the perfect blue faceted beads to make the spider.  Unfortunately, he did not show up on the green fabric, so I took him out and used orange beads (similar in color to the orange in the upper printed section.) 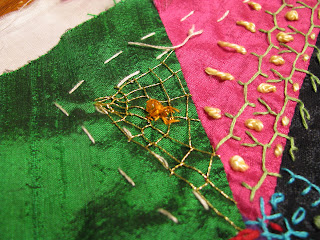 Next, I added two Swarovski crystal butterfly beads.  I put one next to a curly golden swirl near the top.  The second went in the black section near the bottom (beneath the blue flower) and I added a golden flight path for him.

Then I moved on to the center section and couched gold metallic floss around the golden edges on the blue flower.  This took some time, but I loved the end result!

Once more, I found myself at a loss as to what I would do next.  I decided to move to the seam in the lower-right corner.  I wanted to use colors and shapes already used within the block.  I used a green pearl 8 cotton floss to make an open cretan stitch.  This provided me with stems along the printed fabric and the pink fabric.  Next, I imitated the blue and yellow flower in printed fabric near the center of the top of the block.  The flowers in the pink fabric were made with a yellow center and metallic blue petals.  The flowers in the printed section were made with blue and yellow pearl 8 cotton.


Imitating the center flower, in the dark part of the lower printed fabric, I added a blue bullion flower with bright pink beads in the center and green leaves.

It took me quite a while to figure out how to finish framing the center section of the block.  In the end, I used a fly stitch to create seams along the top section.  On the printed fabric, I made pink flowers (matching the shade of fabric in the lower-left corner of the block) with colonial knots and straight stitches.  In the pink section, I used purple floss.  The flowers on the shorter stems were the same as the pink flowers below.  For the taller flowers, I used lazy daisy stitches in place of the straight stitches, but still used a colonial knot for the center of each flower.  Leaves were added to the stems of the taller flowers.

To the right of the center piece, I made my first feathered chain stitch with a green rayon floss.  This created a vine of leaves.  Using a pink rayon floss and lazy daisy stitches, I added flowers between the leaves on the black fabric.

My final additions were the purple metallic butterfly and the blue pearl 8 cotton butterfly in the printed fabric at the top of the block.  A golden flight path helped embellish that top seam, as well.

I wish you all a wonderful day!
-Renee
Posted by Renee at 9:38 PM 5 comments: