Well... today I attempted to make a tree using a couching stitch.  Let's just say, I have a lot to learn!  That did not work out well.  So, I used 6 strands of floss, ran it the length of the tree and then used an overcast stitch.  There are 3 shades of brown on the tree.  It left the top of that section a bit bare, so I added a bat.  It still needs a little more pizazz, but that will wait for another day.  The tree did not turn out quite the way I'd hoped it would; however, once again, my boys thought it was cool and I will take that! 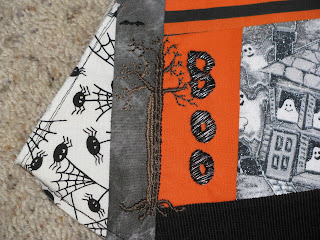 Then I added a buttonhole stitch to the orange section beneath "October."  This stitch left me feeling encouraged.  It was pretty uneven to begin with (on the left), but evened out quite a bit by the end.  My eldest son (Monkey is his nickname) said it looked like stitches on Frankenstein.  Perfect! 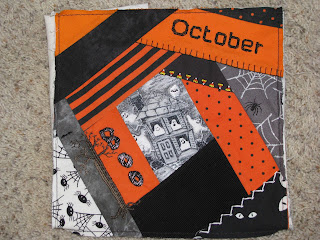 I have ideas for day 3, but that will not be tomorrow.  Perhaps, I will find some time to work on this Thursday.  Hope so!
Posted by Renee at 4:34 PM No comments:

A few years ago, I saw a picture of a cream-on-cream crazy quilt and fell in love.  My first thought was that I had to make one some day.  Then I wondered when I would ever find the time.

For Mother's Day, my wonderful husband bought me a new sewing machine.  (Yes, he was wonderful before he bought it for me, too!)  So, I spent this weekend digging through my fabric and pulling out projects I began before my last machine died.  Let's just say there are more than a few...  I actually finished one project last Friday.  It turned out better than I hoped (as I had no clue what I was doing), and I'd love to show it off; but, it is going to be a Christmas gift, so those pictures will have to wait until the end of the year.

Having finished one project, I justified starting another.  (There is a reason I have so many works-in-progress!)  Today, I began my first crazy quilt.  It is not cream-on-cream, though I still hope to make one of those in the future!  This one will consist of 12 9-inch blocks.  In order to use scraps I already have on hand, I decided to make one block for each month of the year.  I love the contrast of my orange and black Halloween fabrics, so I began with the October block. 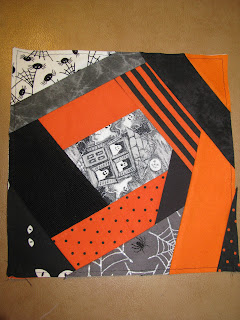 This is the "naked block" (before adding embellishments.)  The spider webs on the gray are glittery, and the eyes glow in the dark.  (Sorry.  If I were tech savvy, this photo would not be sideways.)

While researching crazy quilts on-line, I discovered http://crazyquiltinginternational.blogspot.com/ and was simply amazed by the imagination and talent displayed.  The blog posted pictures of quilt blocks made by the members of the Crazy Quilting International Yahoo Group.  (I was so impressed, I had to join their group in hopes I might some day be half as talented!)

Today, I spent a fair amount of time embellishing this block.  I opted to begin in my comfort zone by cross-stitching.  I basted on waste canvas and completed the following: 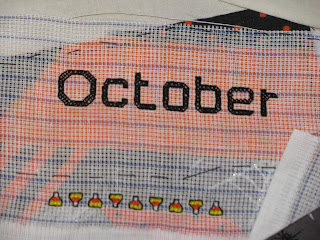 I think the candy corn are shaped a bit too much like Hershey's Kisses, but my kids thought they were cool, and that is all that really matters!

Next, I opted to try a satin stitch.  I covered the moon using four strands of a shiny white floss and added a black bat.  Then I stitched in "BOO" using two strands of black and one strand of silver metallic floss.  The B is a bit scary looking.  I thought about tearing it out, but I decided scary fit the theme. 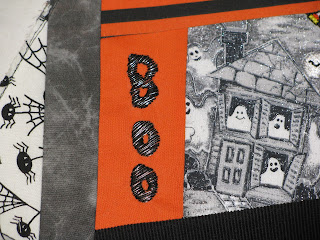 My last stitch of the day is called a Chevron stitch (according to the little embroidery book my mother gave me years ago, when I doubted I would ever need it.  Little did I know what a treasure it would be!)  I used four strands of white for this stitch in the lower-right corner. 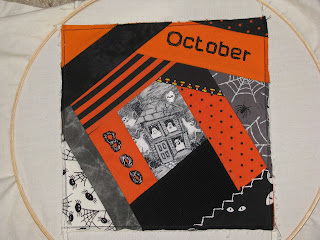 This is how it looked by the end of the day.  I cannot wait to see how it transforms tomorrow!
Posted by Renee at 10:02 PM No comments:

In 2010, I attempted my first blog.  I made a few posts, then life happened.  Crazy chaos.  Two years later, I realize I have some of the same goals I had at that time.  So, I decided to try this again.

This time I have an actual plan.  (Who me?!)  This blog will be a tool to help me accomplish the goals I have as of yet to achieve.

I suppose, looking at that "To Do" list is a little overwhelming; but, I believe I can accomplish most anything I set my mind to - as long as I stay focused, have a deadline, and have some much needed accountability.  So... here's to finally writing that novel, running a half marathon (at least the distance, if not an official race), finishing some sewing projects, and making my first crazy quilt.

Week One Goals:
Writing - Write a minimum of 3000 words this week, without starting over (again!) Current word count is 2104.
Running - Begin working my way up to running 3 miles again.  Run/Walk on Tuesday, Thursday, and Saturday.
Sewing Projects - Finish my first purse project.
Crazy Quilt - Add more embellishments to the October quilt block.
Posted by Renee at 9:08 PM No comments: