I was eager to work on Hazel's block the first moment I saw its picture.  And the work Mardeen did on the block was absolutely gorgeous.  Every time I looked at it, I admired another detail I had missed.

There were SO many ideas in my mind for this block.  I expected it to be an easy one to embellish.  It began that way, but then I struggled and felt more like a novice than I have felt to date.

Many of my ideas were so involved, I feared they would overpower the frog prince, so I decided to try to keep it a bit more simple.  I planned to cross-stitch a frog on the small gray triangle, add a flower border and a dragonfly to the light green triangle, and add a silk ribbon butterfly to the red above the frog.

I made the frog using the Baby Afghan Safari cross-stitch pattern I used to make my oldest son's baby blanket.  I added a pale yellow butterfly (similar to the shade of fabric to the right of the frog) to fill up the gray section.
Next, I used DMC 895 (a dark green similar to the fabric above the gray section) to make stems and leaves and DMC 4077 (a variegated yellow pulling colors from the frog) to make the yellow flowers.  Yellow glass seed beads (size 11/0) added a pretty sparkle.

The read patch looked challenging to me.  I wanted to embellish the seam between it and the blue block below, without pulling the eye away from the frog's crown.  So, I used DMC 666 (the closest red I could find) to make a chain-stitch along the seam.  The silk ribbon butterfly followed a pattern for an Australian Beak Butterfly from The Silk Ribbon Embroidery Bible: The Essential Illustrated Reference to Designs and Techniques.


Next, I added the dragonfly to the green block.  Then, I panicked. Both butterflies and the dragonfly were flying in the same direction.  I also feared there was too much yellow.  In addition, I hoped to add an orange dragonfly, but I feared it would stand out too much with all of the softer colors.  So, I conspired with my friend, Crystal.  (I love her work, you can see why at Crystal's Crafty Adventures.)  I shared a few photos, my concerns, my ideas, and requested her opinion. 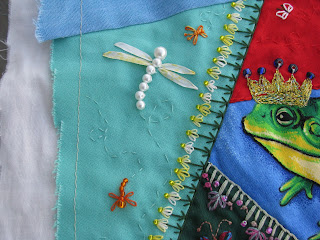 I loved Crystal's idea of combining yellow and orange; so, I made a couple of butterflies using one strand of yellow and one strand of orange floss, in addition to adding the orange dragonfly.  Then, I found a shade of green similar to that of the fabric to stitch in the flight patterns for each insect. 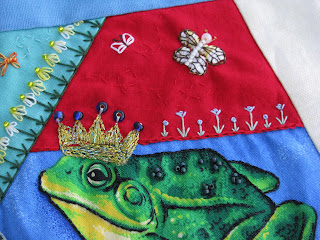 On the red block, I wanted to add some blue and add something to the seam; however, I really did not want to compete with the frog's crown.  So, I ended up making a few small blue and green flowers.  Next, I added a smaller, white butterfly.  In red, I stitched in the flight patterns. 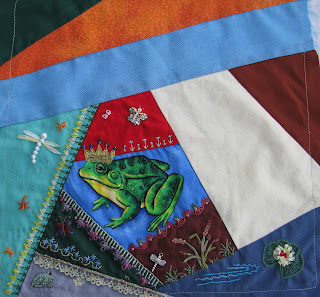 I hope Hazel likes the additions to her block.  I mail it on tomorrow and look forward to seeing how Shannon and Crystal bring the rest of the block to life. 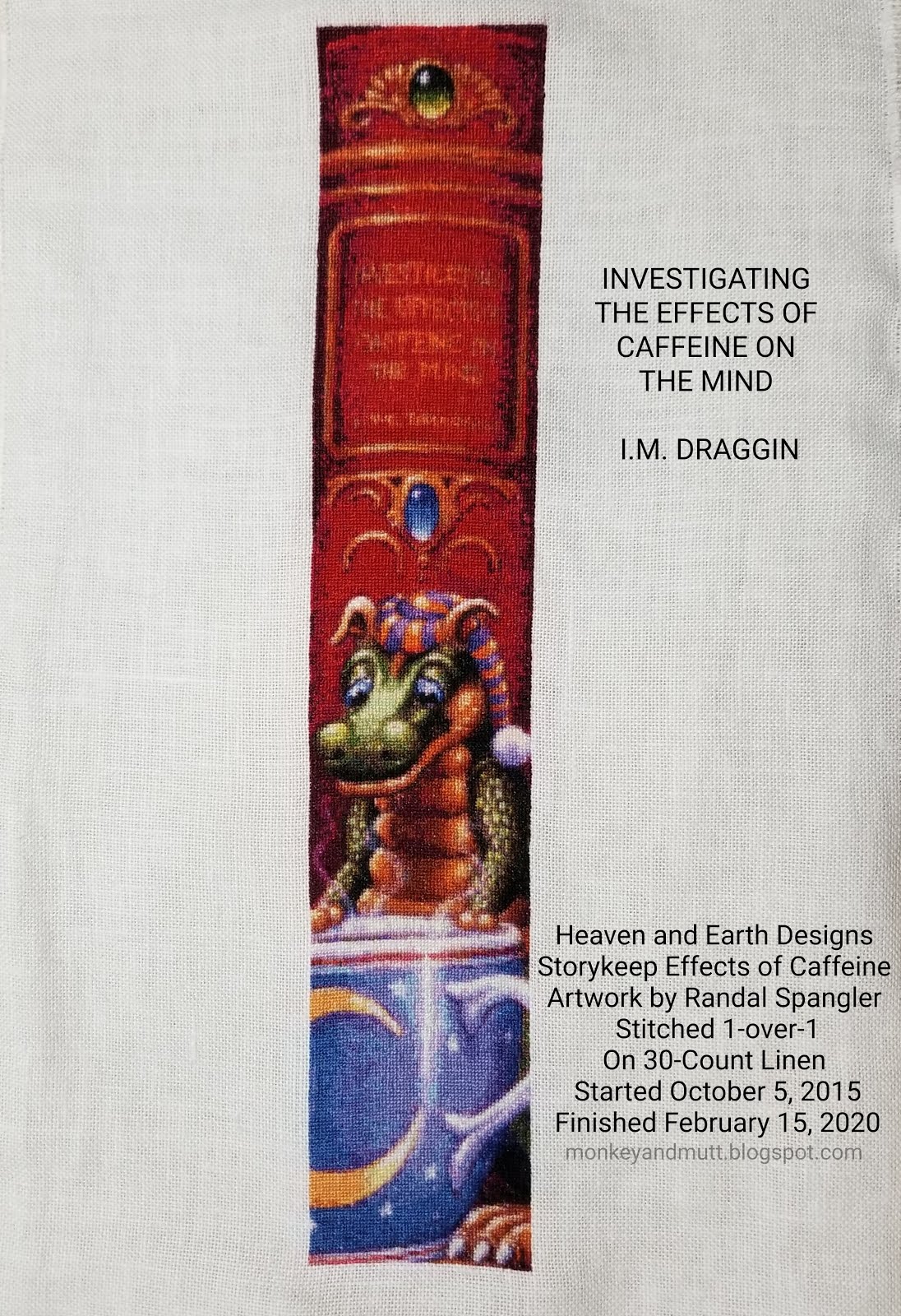